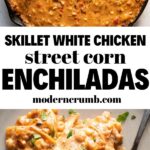 The easiest enchiladas you will ever make! These skillet white chicken enchiladas are layered with corn tortillas, seasoned shredded chicken, Mexican street corn, peppers and a white enchilada sauce.

And if you love enchiladas then these short rib enchiladas are a must try.

No rolling, no fussing, just stacking the corn tortillas. It’s the easiest way to make enchiladas.

I love a traditional enchilada, more than the next person, but if you are short on time this recipe is a life saver.

Here are just a few of the ingredients that make these enchiladas so dang good, for the full list see the recipe card below.

How To Make Skillet Enchiladas

Like I mentioned before, these are the easiest enchiladas to make.

When you make enchiladas in a skillet, you’ll be layering the corn tortillas instead of rolling them.

Start by pouring in a layer of the street corn white enchilada sauce, then a layer of tortillas. Follow this up by spreading out all of the seasoned and shredded chicken.

Then it get’s baked for about 20 minutes.

Chili powder, paprika and onion powder are the only two spices you’ll need for this recipe.

Most of the flavor comes from roasting the peppers. A yellow bell pepper, red bell pepper and jalapenos.

You can use whatever color bell pepper you want but I just think the red and yellow are the prettiest and they have a slightly more sweet flavor than a green bell pepper does.

How To Roast The Peppers

Wash and dry your peppers. Lay them out on a baking tray covered in parchment paper.

Turn your oven to broil and roast the peppers and jalapenos until they are charred around the edges, or mostly charred. The entire pepper doesn’t need to be black but it should have noticeable patches.

After you pull them out of the oven you can put them in a ziploc bag and they will steam and soften.

Wait 20 minutes, take them out of the bag.

Cut off the top, scrape out the seeds from the inside and discard. Chop it all up.

What To Serve With Chicken Enchiladas

My favorite side dish to serve with enchiladas is a big bowl of homemade pico de gallo. Which is a really versatile side, you can use it to top chicken street tacos or carnitas nachos.

And you can always make a batch of these famous strawberry margaritas. 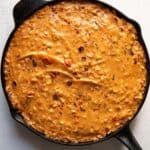 The easiest enchiladas you will ever make! These skillet white chicken enchiladas are layered with corn tortillas, seasoned shredded chicken, Mexican street corn, peppers and a white enchilada sauce.

I'm Tara, the face behind the Modern Crumb food blog! Big time food fan, lover of cozy blankets and cookies. A once upon a time small town Alaskan girl, now I'm living life in the desert of Phoenix.
​
Food should taste delicious, look great and most of all be easy to make! Modern Crumb is all about recipes revolving around family classics with a modern updated approach. Learn More →