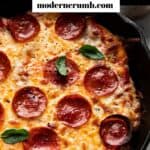 Ditch the pizza stone for this cast iron skillet pizza! There is no outer crust on a skillet pizza so the toppings go from edge to edge, which means extra cheese, extra toppings, extra delicious! Crisp bottom, soft chewy center - think of this like a deep dish pizza but not as deep. Did I forget to mention all you need is 30 minutes?

First of all, I don't want you to feel intimidated by this pizza. Just because it's cooked in a cast iron skillet instead of a pizza stone does not mean that it isn't easy. It's so easy your head is going to spin.

I wasn't joking when I said it only takes 30 minutes. After you make it for the first time you will be a believer.

The bottom and edges are crispy (in the best way) and the middle is so soft and chewy. The cheese is extra gooey and I love when the pepperonis have a bit of char on them. It's the best pizza!

So I like to use my easy pizza dough recipe for this, I make half a recipe and then use that dough ball so I can make two cast iron skillet pizzas. One for the grown ups and one for the kids.

I make my dough in the morning or later afternoon then use it later for dinner and that's how it's only 30 minutes with fresh made pizza dough.

The other alternatives are if you are thawing some frozen pizza dough to use or if you buy a pre made pizza dough ball from the grocery store (it comes in a plastic package). All of these options are great! It's preference.

The ingredients are going to be different for everyone. Because not everyone likes the same toppings or even the same sauce for the base of their pizza.

Traditionally most people will choose a red pizza sauce for the base. You can buy a jar of this at the store or you can make your own (so good).

No matter what you will need pizza dough, whether that's homemade or store bought.

To give you some ideas here is a list of a few popular pizza choices and the toppings you will need to get to make them.

Pepperoni pizza. Pizza sauce (I have a recipe below in the recipe card), mozzarella cheese, pepperonis and some dried oregano.

How To Make Cast Iron Pizza

Start by heat a cast iron skillet on the stovetop over medium heat. Pour olive oil in to the bottom of the pan, you need enough to completely cover it.

Roll out one piece of dough (remember one dough ball needs to be cut into two pieces!) to just larger than the skillet. Place it in the skillet, it will start to cook immediately and get bubbly.

Check for doneness on the bottom using a heat resistant spatula, it should be light golden.

The beauty of a cast iron skillet pizza is that you can take the toppings all the way to the edges. No ugly stepsister crust to deal with that one one wants to eat.

Spread the pizza sauce, sprinkle on the mozzarella cheese and top with pepperonis.

Bake in a 500 degree oven until everything is melted and starting to bubble. This could be anywhere from 5-10 minutes depending on how many toppings you put on.

Turn the heat setting to broil and cook an addition 2-3 minutes or until it's reached your preference of crisp.

I like to broil until the pepperonis start to get crispy on the edges and the cheese turns from light yellow to golden with dark spots on it.

You just have to watch by the oven door with the light on - try not to oven the door continuously.

Once it's out of the oven transfer to a cutting board, let it cool a few minutes then dig in.

What size cast iron pan do I need to use?

I don't like pepperoni what other toppings can I use?

Scroll up the page to a section titled "pizza topping variations".

Can I make my own pizza sauce?

Yes! I've included a fool proof pizza sauce recipe in the recipe card. It doesn't even need to sit (although it tastes better when it has), you can make it right when you make the pizza.

My pizza crust burnt, what happened?

You cooked it too long on the stove, or the temperature was way too hot. I can give you recipes as a guideline but ultimately you have to keep an eye on your food.

As an Amazon Associate and member of other affiliate programs, I earn from qualifying purchases.