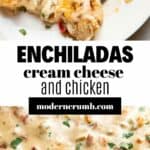 These cream cheese white chicken enchiladas are so delicious, your family will devour the entire pan of them! The white cream cheese sauce is made with roasted bell peppers, roasted jalapeños and a blend of cream cheese and pepper jack cheese.

Nothing can replace a batch of homemade cream cheese white chicken enchiladas! Especially when you have them leftover the next day, that is, if there are any leftovers.

A white chicken enchilada is simply enchiladas in a white sauce, instead of a red sauce. The sauce for these is a cream cheese based sauce made with chicken broth, heavy cream, cream cheese and pepper jack cheese.

It is so delicious. Especially when you add in some of the roasted bell peppers and jalapeños.

I cannot confirm or deny that I dip chips into the jalapeño cream cheese sauce while preparing everything.

It may seem like a lot of ingredients but think of it as so much flavor! Here's what you need to make these cream cheese chicken enchiladas, the full list and instructions are below in the recipe card.

All About Peppers and Heat

I would rate these enchiladas on a mild to medium heat. They aren't very spicy. For reference, they are mild enough that my two grade school children eat them just fine without complaint.

My eldest does not like spicy food and these don't set off any heat alarms for him.

You can buy mild, medium or hot diced green chiles. I went for a medium heat with mine.

As for the jalapeños.  There's a lot of misconception about where the heat from the jalapeño comes from.  So let's clear the air!

The hottest part of the jalapeño is the membrane.  Not the seeds.

Yes the seeds can be hot, but it's because they are attached to that super spicy membrane!  Mind blown?  Now you know.  So if you want a hotter enchilada, leave more of the membrane (the white part).

And did you know a red bell pepper starts out as a green bell pepper? Then turns to yellow, then orange. They all start the same it's just a matter of ripening time.

A red bell pepper would have ripened the longest and will also be the least bitter. You don't have to use a yellow and a red, you could use two red bell peppers but I love the way the colors look to have both.

I used a few different colors in this recipe for sheet pan sausage, peppers and onions.

Sure you could use the peppers exactly how they come, chop them up and add them to your enchiladas. But where's the fun in that?

Roasting peppers is so easy, it takes minimal effort.

Here's how to do it.

Get the oven really hot, the broil setting. Wash your peppers. Line a baking sheet with parchment paper, or foil and place the peppers (whole, do not cut them up) on it.

Broil them in the oven, once a side has turned black, flip it over and continue this until all around the pepper is charred.

Once they are out of the oven, let them sit for a few minutes and put them in a sealed ziploc bag to steam. They should steam for an hour but you could leave them in there until you are ready to use them.

After they have steamed take them out and peel off the skin, remove the seeds and stems and chop up. They are ready to use in your chicken enchiladas now!

To make the cream cheese white enchilada sauce you start by making a simple white sauce.

Melt butter in a pan, thicken it with flour. You need to let it cook for a few minutes after adding the flour, to get the flour taste out.

Then, add in chicken broth, it will thicken. Using a whisk is the best tool for this to avoid lumpy sauce. Add in the heavy cream.

Then add cubed up cream cheese. It may look lumpy at first but keep whisking on a low heat and it will slowly melt.

Add in your roasted peppers and the pepper jack cheese and mix until smooth and creamy.

Creamy, cheesy and a bit spicy, this sauce is delicious!!

Corn tortillas straight out of the bag need to be, in a sense, woken up.

If you try to use them as is, they will crumble, crack and fall apart. Unless you are making skillet enchiladas, then you can just pile them up since they don't rolled up. I like these skillet mexican street corn enchiladas for that.

My favorite way to heat up corn tortillas is in a cast iron skillet, with a little bit of high heat oil (like sunflower oil). Here's what you do.

Turn your heat up to high, to get the skillet smoking and hot. Take just a little bit of sunflower oil with a basting brush and coat the skillet with a thin layer.

Add in a corn tortilla, one at a time (unless you have a really big skillet and can fit more). You'll start to see them shrink just ever so slightly, flip it and cook an additional 10 seconds or so.

To keep them soft, as you take them out of the skillet put the corn tortillas on a plate with a slightly wet paper towel on top of them. This lets the heat circulate and continues to steam them.

So when you roll your enchiladas, the tortilla will stay whole - no cracking.

How To Put Together the Cream Cheese Chicken Enchiladas

I find that rolling up one enchilada at a time is the way to go. Spread a bit of the white cream cheese enchilada sauce in the bottom of your baking dish.

Start by laying out a tortilla and spoon on some of the chicken filling. Top with some of the pepper jack cheese and roll it tightly.

Line them up in your baking dish.

When you get to the end, if you have some extra space (that awkward last bit of space) I like to stuff however many I can in there, even if it means they overlap.

Take all of the enchilada sauce and pour it over, completely covering. Then they will bake until golden brown around the edges.