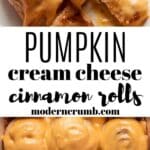 Once a glimmer of Fall happens, we all have one thing in mind, besides sweaters and cute boots.

These pumpkin cream cheese cinnamon rolls have me hooked on pumpkin season.

Soft and fluffy in the center with an ever so slight firm exterior.  They have loads of swirls, so all that dreamy pumpkin cream cheese frosting nestles in to all those crevices perfectly.

The cinnamon roll itself doesn't have any pumpkin in the batter but I think it's better to not go overboard.  It's a good middle ground because not everyone likes pumpkin, so even those crazy non pumpkin fans enjoy these.

Imagine you just took a bite out of the most amazing pumpkin pie, silky and smooth, but combine that with some cream cheese frosting and it is heaven on earth.

One thing I really love about making cinnamon rolls is that the dough is so forgiving.  You roll and roll until you have this big rectangle, fill it up with all the luscious butter and sugar and then roll it on up.

Making cinnamon rolls takes an afternoon. There are two times that the dough needs to rise. The first is to proof your yeast, this is what gives the rolls there volume. If you don't get the yeast just right your rolls won't rise.

The second time is after you cut the rolls and lay them in your pan.

I use sewing thread to cut my cinnamon roll pieces, for that nice precise cut.

Once they have baked in the oven, let them cool then spread your frosting all over.

Here's what you'll need to make the pumpkin cream cheese frosting that goes on top.

So let's take a minute and go over some things I've personally learned through trial and error in hopes it can help you make beautiful (stress-free) cinnamon rolls.

It's a great fall treat to make with kids.  Mine love helping as much as possible and although my daughter always manages to get more ingredients on herself and the counter, then in the bowl, they still turn out perfect with the best experience since I get to make them with the people I love.

This is a really great cinnamon roll recipe and you don't have to make it with the pumpkin cream cheese frosting if you don't want to.

Feel free to use the same recipe at Christmas time sans pumpkin.  I love making a big batch of these and surprising people with them, nothing puts a smile on a face like a a big old cinnamon roll.

If the milk isn’t warm enough it won’t activate the yeast, it should be warm but not hot, you should be able to put your finger in the milk comfortably

I'm Tara, the face of the Modern Crumb food blog - a collection of easy and delicious recipes! Big time food fan, lover of cozy blankets and cookies. A once upon a time small town Alaskan girl, now I'm living life in Phoenix with my family.

Food should taste delicious, look great and most of all be easy to make! Modern Crumb is all about the best family recipes you can serve. Each recipe is tested meticulously and most are kid friendly. Learn More!