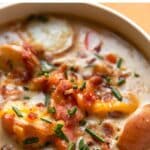 Watch the video step by step and see just how easy this recipe is to prepare.

You'll love just how easy this recipe is to make, it takes around 30 minutes and has a minimal effort cleanup. You can look forward to big pieces of red potato, carrots and a silky smooth chowder base.

My secret to making the super extra rich and creamy is by mixing both sour cream and cheddar cheese in the broth.

And no baked potato is fully loaded without the bacon and chives. There is bacon in the soup but you could also set some aside to sprinkle on top. The saltiness of the bacon is a perfect match to the creamy cheesy chowder broth.

The end result tastes just like a baked potato. I dare you not to make this over and over again.

For the full list of ingredients with the amounts please refer to the recipe card at the end of the post.

Ever wondered what in the world the difference is between soup and chowder? How do you distinguish between the two? Read on!

Soup consists of a both, it's usually thinner. Like this Olive Garden Zuppa Toscana Soup.

Chowder is thicker and creamier. It's made with some kind of cream or milk.

The chowder base for this baked potato chowder is a mixture of chicken broth, half and half, sharp cheddar cheese and a bit of sour cream.

Which makes it so delicious!

How To Get A Smooth Chowder

Getting a smooth chowder base all boils down to patience and taking your time to incorporate ingredients gradually.

To do this, add flour to the butter in your pan, and stir for a minute to cook out any flour taste. It will get thick, like a paste.

Then add in the broth, whisking continuously as you add it.

The trick to adding dairy to your broth is making sure your liquid is on low heat (or no heat) when you add it.

I actually turn the heat off, slowly stir in the half and half then sprinkle in the cheddar mix one small handfull at a time until combined. Same with the sour cream.

Slow and steady wins the race when adding in dairy products. Low heat and continual stirring and you won't have any problems with curdling.

How To Make Baked Potato Chowder

Start by cooking the bacon in a soup pot. Take the bacon out of the pan and chop it up. Drain out any excess grease and wipe the pan out. Make sure to leave any stuck on pieces of bacon because those have tons of flavor!

Add in the olive oil, onion and garlic. Cook this for 3-5 minutes. I like to add a pinch of salt any time I saute onions, it's optional but I like the results.

Mix in the flour and stir for a minute or two then pour in the chicken broth and let it come to a boil.

Add in the red potatoes, carrots, corn and chopped up bacon. Cover and simmer on low heat for 20 minutes.

Turn the heat off then slowly add in the half and half, followed by the sour cream, then one handful at a time add in the cheddar cheese.

Scoop into bowls and top with chopped chives!