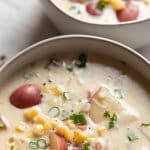 A creamy chowder soup filled with baby red potatoes, corn and chunks of ham. The perfect post holiday soup to use up all the leftover ham from Christmas dinner or some stashed away in the freezer.

This ham and potato corn chowder is so easy to make, it preps quickly and cooks in just 30 minutes. I think we can all agree that we have time for this.

This really cuts down on how heavy it is. This soup is lighter than the loaded baked potato chowder.

The red potatoes are the star of the soup, they hold shape so well! Unlike russets that tend to break apart easier and disintegrate after cooking. You won't have issues with the red potatoes falling apart.

My favorite time to make this is after any big holiday where we cook a ham. I'll make sure to get a bigger ham just so I can freeze some to make this soup all year round. It pairs perfectly with cloverleaf buttery herb rolls.

And of course there is corn in the recipe. I always have frozen corn on hand but if you prefer to use fresh then that's fine too.

This is a mix between a soup and a chowder. It's not as thick as a full fledge chowder but it is a thicker than a regular soup, so I've settled on calling it a chowder. Here's what you'll need to prepare it.

How To Make Ham and Potato Corn Chowder

Start by sautéing the chopped onion and garlic in a soup pot with olive oil and butter until translucent. I like to always add a pinch of two of salt when I sauté onions, it gives them more color and flavor.

While this cooks for about 3-5 minutes, you can chop up your potatoes, ham and get your corn ready.

Next add in the flour, this will help your soup thicken. You need to cook this for 1 minute, no less. Pour in the chicken broth, half and half, add the potatoes, corn, ham and thyme.

Everything simmers together for 30 minutes. It may still seem a bit thin at this point. But as it starts to cool it will thicken more.

You don't need to add extra salt because the ham is already salty and as it simmers, that saltiness will come out in the chowder.

Top it with some green onions, optionally.