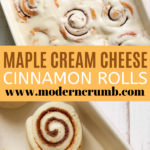 If you are a cinnamon roll connoisseur than these maple cream cheese cinnamon rolls are for you!  You need them, you have to have them, go make them right away!

It's quite exciting, obviously (insert snarky smile).  We can't take ourselves too seriously, now can we?

The dough is soft and fluffy and slathered with butter, brown sugar and extra cinnamon. The cream cheese frosting is silky smooth and the maple syrup gives them an extra yummy flavor. Just like in these maple pecan scones. Maple is one of my favorite fall and winter flavors!

The other thing that makes a great cinnamon rolls is, drum roll, cinnamon.  Don't get skimpy on the cinnamon. This recipe calls for 1 whole tablespoon of cinnamon.  And it's perfect and spicy.

The more you make these the quicker you'll be able to get them in the oven and on the table. Really that's any cinnamon roll recipe. Practice makes perfect.

Make sure to read the section about tips and frequently asked questions. I like to add in some pointers to help you get the most out of a recipe.

It all starts with the dough.

Cinnamon roll dough should be very soft and still a bit tacky when it goes to rise.  If it's too dry then you'll have dry cinnamon rolls.  That makes sense, right?

If you want extra ooey gooey cinnamon rolls then these big fat pecan sticky buns are just what you need.

I know it's tempting to keep adding flour when your dough is still sticky. I've made that mistake too many times and all that happens is dough that doesn't make it through the second rise and dry when they are baked.

So the best thing to do is add your dry ingredients, look at it, if it still looks really wet don't just dump a bunch more flour in, sprinkle it in 1 tablespoon at a time.

Sometimes it take a minute to really tell how much of a difference that 1 tablespoon made in the texture. You can always add more flour - but you can't take it away.

How To Roll The Cinnamon Roll Dough For Perfect Swirls

To get perfect fluffy swirls, you'll want to pat or roll the dough out so it's not too thin but not too thick. That's not helpful is it...let me further explain.

Dough rolled out too thin runs the risk of a few problems.

First is it's more likely to stick to your counter top, that's just harder to roll at that point. Second, the layers tend to dry out faster. And third, really thin layers don't poof up as much during the second rise before they get baked.

Dough rolled out too thick could end up just like a big cinnamon roll blob. That may actually be what you want, you'll have really big puffy pieces of dough. But try to aim for at least 3 swirls to the center from an edge.

Dough rolled out just right won't be too thin or too thick. There are prominent swirls for the frosting to catch in and it will be thick enough that they layers are puffy and soft. Just like in these pumpkin cream cheese cinnamon rolls.

I like to do the traditional 12 rolls in a 9x12 dish.  It's the perfect size and always fills it up.

Make sure the milk is the perfect temperature to activate the yeast. This is the part that can go most wrong for people. It should feel warm but not hot. To know if you activated the yeast correctly, after 5-10 minutes it will be frothy and bubbly.

Don't add too much flour. The dough should be tacky to the touch.

Let your dough double in size before rolling it out and adding your filling mixture. Also, let it rise again after your rolls are assembled and in your pan. Each rise takes about 30 minutes to an hour, depending on the temperature in your house.

You can turn your oven on, then off, just to pump in some warm air and let them rise in there. Just make sure not to leave your oven on and accidentally bake your dough!

I'm Tara, the face of the Modern Crumb food blog - a collection of easy and delicious recipes! Big time food fan, lover of cozy blankets and cookies. A once upon a time small town Alaskan girl, now I'm living life in Phoenix with my family.

Food should taste delicious, look great and most of all be easy to make! Modern Crumb is all about the best family recipes you can serve. Each recipe is tested meticulously and most are kid friendly. Learn More!