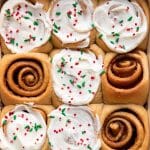 These gingerbread cinnamon rolls are soft, fluffy and taste just like Christmas. With hints of gingerbread flavors and festive sprinkles on top of the cream cheese frosting, you can't help but feel nostalgic eating one, or two!

It's a toss up which is better, these or the very popular big fat sticky pecan buns! What do you think?

The hypnotizing scent of gingerbread is such a classic and familiar Christmas smell.

It's a mildly flavored gingerbread recipe. Too much gingerbread flavor can be a bit overwhelming, so this is ideal for everyones taste.

My favorite thing about these, is the festive holiday sprinkles on top! These are perfect for a Christmas dessert.

Getting the dough correct is the most critical (and challenging) part of making cinnamon rolls.

First, you must get your milk temperature right. It needs to be warm but not hot. The milk is what you add your active dry yeast to.

This combination together is what gives the cinnamon rolls life, the fluffy texture. If the yeast isn't activated properly that's when you run in to problems.

Make sure to check out the frequently asked questions section below.

I like to sprinkle a bit of sugar into my milk/yeast mixture while it proofs (get's frothy). Once you have that foamy frothy appearance on top it's ready to get mixed with the dry ingredients.

Using a stand mixer with a dough hook is going to be the easiest route for kneading the dough. But you can mix it by hand as well. You are looking for a very soft, smooth, pliable dough in the end.

Since we are making these with a gingerbread taste, you'll add in molasses, brown sugar, cinnamon, nutmeg and ginger to your dry ingredients.

You can pour everything in to your dry ingredients, followed by your milk/yeast mixture that you proofed.

Knead this on low for about 5 minutes. It's okay if it still seams a bit tacky, it will come together.

Dust a bit of flour on your counter and put the dough on it. Use your hands to press the dough into a tight ball, seam side down put this back into your mixing bowl.

After your dough has doubled, it's ready to roll it out and spread the filling.

You'll want to dust your counter with flour so the dough does not stick. I like to start rolling out my dough, lift it up, dust a bit more flour then turn the dough over and continue rolling.

This helps ensure the dough doesn't stick when you go to roll it up. Aim for 18" long x 15" wide (the long edge should be closest to you).

Pour on your melted butter and using a pastry brush or the back of a spoon, spread it all over. It's okay if you go to the edges but try to leave the edges closest to you with at least a half inch bare.

Use your hands to spread the filling evenly across the buttery dough. The filling is made up of brown sugar and cinnamon.

Starting with the edge furthest from you start rolling the dough toward you, like a jelly roll.

Keep rolling until you have reached the end and tuck the seam under so it's facing the counter.

To get the most even size, start by making your first cut in the very middle. You want a total of 12 pieces. Just takes a little basic math.

Line them up in a greased 9x12 baking dish. Let them rise for 30 minutes to an hour. You want them to noticeably puffier then when you first put them in your pan.

After that, bake them! Let them cool a bit, then slather on all that good cream cheese frosting.

How To Make Cream Cheese Frosting

For the cream cheese frosting you will need cream cheese, powdered sugar, butter, vanilla extract and a pinch of salt.

If you want your frosting to be really silky and smooth (who doesn't?) then it's best to let your cream cheese come to room temperature before you use it.

Put everything in to a bowl and beat until its fluffy and creamy.

It's a good idea to wait until the gingerbread cinnamon rolls have cooled down a bit to put the frosting on.

Or what I like to do is wait about 10 minutes, put a little bit on so it seeps into the crevices while still warm, then let them cool and add the rest.

My milk/yeast mixture isn't getting frothy?

There are a few reasons for this. The milk was either too cold or too hot. The other could be your yeast is expired.

What temperature should my milk be for perfect cinnamon roll dough?

Between 105-115 degrees for dry yeast is thought to be the correct temperature for proofing, according to Bob's Red Mill. It should feel just warm to the touch.

Why are my cinnamon rolls are raw underneath but dark on top?

This can be caused by an oven that is too hot, or a pan of cinnamon rolls that was cooked too close to the top of an oven. If your oven runs hot you can always add some tinfoil tented over the top if you notice them turning golden too quickly.

Can I make these gingerbread cinnamon rolls gluten free?

I haven't had the opportunity to test this recipe with gluten free flour, yet. Unfortunately I wouldn't be able to advise if would work out.

My gingerbread cinnamon rolls were dry, what happened?

They were baked too long, the dough was over mixed, there was too much flour added during the mixing process and the yeast didn't activate properly. All reasons for dry cinnamon rolls.

As an Amazon Associate and member of other affiliate programs, I earn from qualifying purchases.