You are going to love this recipe for BBQ chicken pizza! Soft pillowy pizza dough with the most insanely good mixture of BBQ sauce, chicken, cheeses, onion and cilantro.  It’s putting cheese pizza to shame.

And if you are a true pizza connoisseur you would love this Mellow Mushroom Kosmic Karma copycat, Hawaiian pizza or this caesar salad pizza.

Pizza is my favorite food, is it yours?  This BBQ chicken pizza recipe is the best!

My husband and I have been making homemade pizza for so many years, it’s just second nature by now when it comes to whipping up a pie.

Pizza pie, that is.

And when I say my husband and I, I mean me (haha), if you asked him what’s the first step I think he’d say “eat the pizza”.

And making pizza doesn’t have to be hard, it’s actually really easy. You can opt for a store bought dough or you can make your own homemade dough.

It’s easier than you think to make a bbq chicken pizza.

Then you have fresh out of the oven pizza and it’s a healthy alternative to store bought or delivery pizza.

I’m just gonna say it, California Pizza Kitchen has nothing on this BBQ chicken pizza. And while we are on the subject of ‘better than’, it shuts down Papa John’s too.

What Toppings are on BBQ Chicken Pizza?

The ingredients are pretty basic. You only need a handful of things.

How To Make Pizza Dough

For this homemade pizza dough recipe all you need is an hour.

It’s seriously and I’m not being all food bloggy and saying it takes one hour but really it’s half a day.

Soft puffy edges and a perfect base. It holds all those delicious BBQ chicken toppings perfectly.

Over the years we’ve tested out all sorts of variations of toppings but BBQ chicken is one of my families all time favorites.

After years of making it I’d like to think I’ve perfected this recipe too.

I top it with cilantro after it’s cooked in the oven, I like that refreshing herb taste, it really kicks the flavor profile up a notch, or ten.

Check it out below. 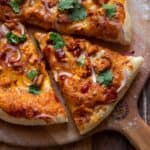 The Best Ever BBQ Chicken Pizza

Did you make this recipe? Please leave a review!

I'm Tara, the face of the Modern Crumb food blog - a collection of easy and delicious recipes! Big time food fan, lover of cozy blankets and cookies. A once upon a time small town Alaskan girl, now I'm living life in Phoenix with my family.
​
Food should taste delicious, look great and most of all be easy to make! Modern Crumb is all about the best family recipes you can serve. Each recipe is tested meticulously and most are kid friendly. Learn More →