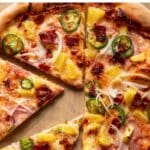 If you are craving the real deal, this recipe is for you.

I am obsessed with Mellow Mushroom’s pacific rim pizza!! I’m gonna shout it on the rooftops and I don’t care who knows it. Pineapple and jalapeno are a serious revelation.

Don’t know what Mellow Mushroom is?

Mellow Mushroom is a pretty well known restaurant in Phoenix but they actually have them all over the USA!  There’s a few locations in our town and we fully enjoy going there.

It’s a laid back vibe where everything has a ‘groovy’ theme. As much as I like going there I always feel like their pizza is lacking in flavor, despite the amazing combinations of toppings!

Recreating recipes from your favorite restaurant is a definite must.

The first one I copycatted (is that a word?) was their new pizza, the Pacific Rim.

Making it reminded me of our longstanding favorite ham and pineapple.

We used to make this one ALL THE TIME.  But it was a ham and pineapple 2.0.

This pizza showcases sliced canadian bacon, bacon, onion, pineapple and jalapeños.  I’ll let that set in for a minute.  Drooling yet?

I don’t know about you but I love when food has different dimensions like that.

The bacon(s) give you all that salty deliciousness while the pineapple comes in all sweet and tangy but then you get a bit of jalapeño and you’ve been hit with some heat.

When I make pizza I always add a pinch or two of salt to the top of my sauce or olive oil and then another once all the toppings are on.

Salt brings out the flavors and pizza is no exception.  Don’t forget to salt yo’ pizza, just don’t make it look like an Alaskan blizzard landed on the darn thing.

If you love mellow mushroom try my other copycat pizza – the Kosmic Karma. 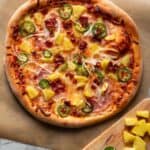 I'm Tara, the face of the Modern Crumb food blog - a collection of easy and delicious recipes! Big time food fan, lover of cozy blankets and cookies. A once upon a time small town Alaskan girl, now I'm living life in Phoenix with my family.
​
Food should taste delicious, look great and most of all be easy to make! Modern Crumb is all about the best family recipes you can serve. Each recipe is tested meticulously and most are kid friendly. Learn More →