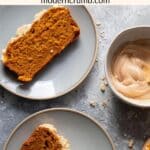 It’s like taking a bite out of a slice of pumpkin pie. This pumpkin loaf with pie crust crumble tastes just like your favorite fall dessert. Super soft and moist, filled with the iconic pumpkin pie spices and topped with a buttery, savory crumble. Plus, a homemade cinnamon honey butter for spreading on.

This is sponsored post by Prince of Peace Ginger, but all ideas and opinions are my own.

Today we’re making the most amazing pumpkin loaf cake (pumpkin bread?). It’s so hard to classify what category of baked goods is goes in.

It’s sweeter than a typical bread, but it doesn’t have an airy cake texture. It’s sturdier but extra extra moist.

Like you just took a bite out of grandma’s pumpkin pie she made from scratch. That’s what this tastes like.

I’ve decided to start Fall a month early. Because 2020 is rubbish and it’s about time for sweaters, Hocus Pocus and all things pumpkin.

Also, a little birdy told me that Starbucks is releasing pumpkin spice latte this week.

Just kidding, I googled it.

It’s like that’s really our official go ahead each year. Pumpkin spice latte is out, go wild with your fall decor and pumpkin everything. Yippee!

I partnered with Prince of Peace Ginger, to make this pumpkin loaf extra special by using their ginger honey crystals in replace of ginger powder.

What’s In The Pumpkin Batter?

The batter is going to be really reminiscent of what you’d put in your pumpkin pie. I tried to keep it really similar.

To make your own pumpkin pie spice it’s so easy.

How to Make Pie Crust Crumble

Okay this is my favorite right here. You can’t have pumpkin pie without the iconic, flaky, buttery pumpkin pie crust.

To make the pie crust crumble it’s a couple ingredients. Put everything in a bowl and use a fork to mash it all around. Really combine it. Try to get large chunks.

Then use your hands to crumble it up.

Sprinkle it over the pumpkin batter once it’s in the pan. Then gently press it into the batter. Just so that it’s really sticking to it. So when it rises while baking, it won’t topple off.

How Much Pumpkin Pie Spice To use in a Pumpkin Loaf?

Less is more. You do not need to dump in a bunch of spices.

Dry spices are way stronger than fresh, so you don’t need teaspoons upon teaspoons.

You can definitely add too many spices to your pumpkin loaf. (Sorry family, Thanksgiving 2010’ish).

How To Make The Cinnamon Honey Butter

When I was thinking about making a pumpkin pie what’s the one thing we always top it with? Whipped cream and cinnamon.

Well, bread and whipped cream is a bit strange. So I came up with this cinnamon honey butter that’s like the best thing ever. Sweet and spicy. It definitely must be made. And it’s so easy.

All you need is butter, powdered sugar, honey, cinnamon and salt.

Mix everything together in a bowl.

If you want an extra zip of fall flavor then you can sprinkle on some of these Prince of Peace ginger honey crystals. As soon as it hits your mouth, everything just melts into this delicious pool of pumpkin pie goodness.

Don’t ask me how many pieces I had…

Can you freeze pumpkin loaf?

I love making a double batch of loaf cake and freezing the other one.

Wait until it has cooled several hours and is no longer warm to the touch. Wrap it in plastic wrap and freeze.

When you are ready to eat it, move it from the freezer to your fridge to thaw.

With that being said, you could freeze some cinnamon honey butter too. 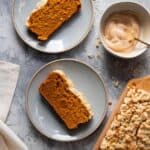 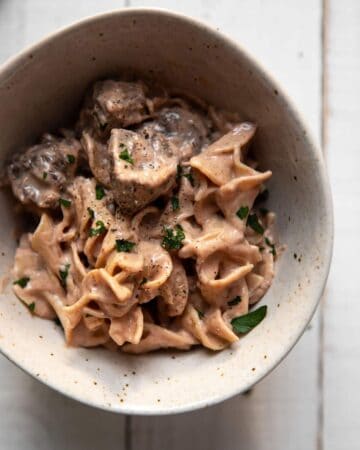 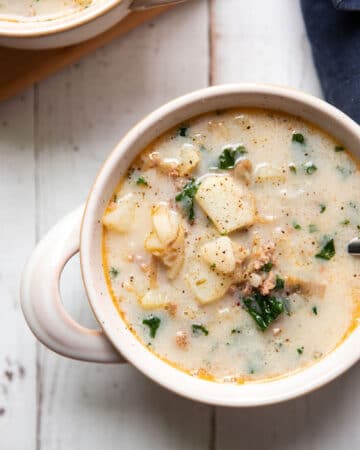 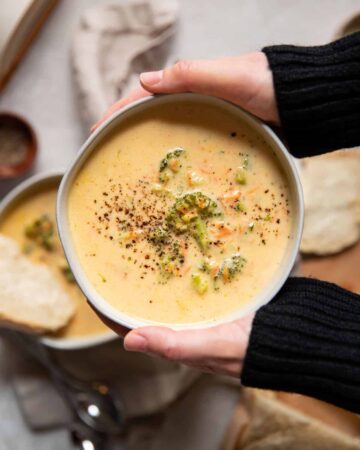 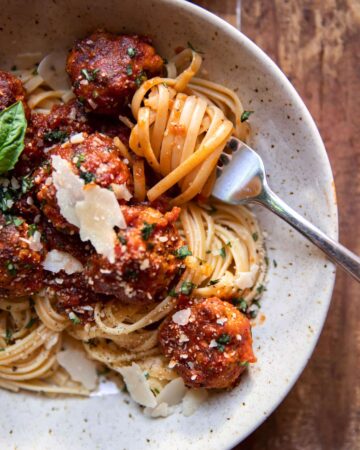